Following the success of the project release, he then went on to co-host a Young Thug concert at Club Bliss in Washington, D.C. Soon after, he released more music to follow up PDL with releases like “One Look / Poison”, “Amy”, and “Risking All Of It.”

After a heaping of buzz, he premiered his 2nd project Almost Impossible on Daily Loud and also reached 2DopeBoyz, Bluntiq, and many more.

1) First thing’s first, Almost Impossible is dope man, I really like the sound and vibe going throughout the project. What were some of your inspirations and influences for the project?

First of all, thank you for listening! As far as inspirations, my goal for every project and release I do is to showcase my un-capped growth and to test myself by manipulating my old work into new material. I’m not a fan of duplication.

Every new beat & every time I’m engineering, I’m inspired by my former work to push my newer work whether it’s unreleased material or new material. I’m always challenging myself because I’m the only thing stopping me from excelling.

2) You chose to self-produce the entire project and not have any feature appearances, which I think is super admirable and very rare these days. What made you decide to go down this route?

My highest respect has been for the ones who produce and mix their own vocals and production. Honestly, that’s one of the best things I love in the music world. I love being able to showcase my thoughts from bottom to top.

I’m a fan of so many genres so it’s hard for me to fit into a box when creating. Even when I’m working on a “banger”, the production is still typically off-course from the day-to-day “bangers”. All of my work is self-produced.

Not to say that you won’t see me having some co-producers in the near future, but I love the shocking people will the things I’m able to do on my own, which is everything.

My studio is in my apartment. I’ve never been to a fancy studio or anything before and I never really plan on it. Comfort is the key to great vibes. I was so comfortable making this project, and I had close friends & close family frequently in while I was creating it the first few months.

Every night isn’t magical. Sometimes the vibes are so great that I just end up relaxing and listening to beats and music without acting on it. Sometimes, the vibes aren’t up to par for the session. It’s never forced at any time though. If I’m working on my own recordings, then there’s only a few people that can actually sit in the room if any.

When I’m producing, it doesn’t matter who is in the room because sometimes the production is inspired by the vibe of the room. As far as engineering, I can only do that on my own time and that process takes the longest of the 3.

Engineering takes hours and sometimes even weeks depending on what kind of feel the song needs or if I think it needs changing.

4) Growing up in Chattanooga, Tennessee, who were some your early musical influences?

I grew up with gospel music so, my introduction to hip-hop was like Aaliyah, Timbaland, Maxwell, Gucci Mane, Usher, and Nelly.

5) Are you planning to tour for Almost Impossible? If so, what’s the planning like for it?

Nothing is for certain yet, but I have some interesting things to announce soon.

6) Are you happy staying as an independent artist or are you looking to sign with a major label in the near future?

That’s a tough question. Don’t want to say anything that’ll jinx me. So I can say that I’m still working on music and pushing the sounds regardless of my status.

7) How are your currently making money as an independent artist? What sort of revenue streams do you have going on?

The blessing I have not only lets me make music as an artist, but also as I producer, engineer, and a writer. I wear many hats for not only myself, but other’s as well.

8) If you could collaborate with any 3 artists – one producer, one rapper and one singer – on one song, who would they be?

I’m praying for more blessings. Every year is better than the last. I haven’t started thinking about the next project yet. I worked hard on Almost Impossible and I think it deserves some breathing room.

However, I can say that from a production standpoint, there’s some things that shall soon surface. One big project to mention is Dustin Elijah’s new EP, which I am executively producing.

A bunch of features I did should surface on some namely projects and artist releases soon. Things are looking bright for myself and the team and I want to thank all my fans, friends, enemies, and family for helping me get to points I set to achieve. 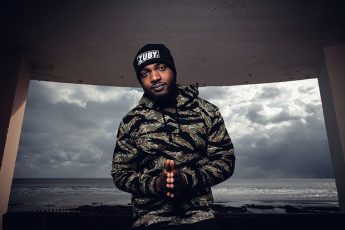