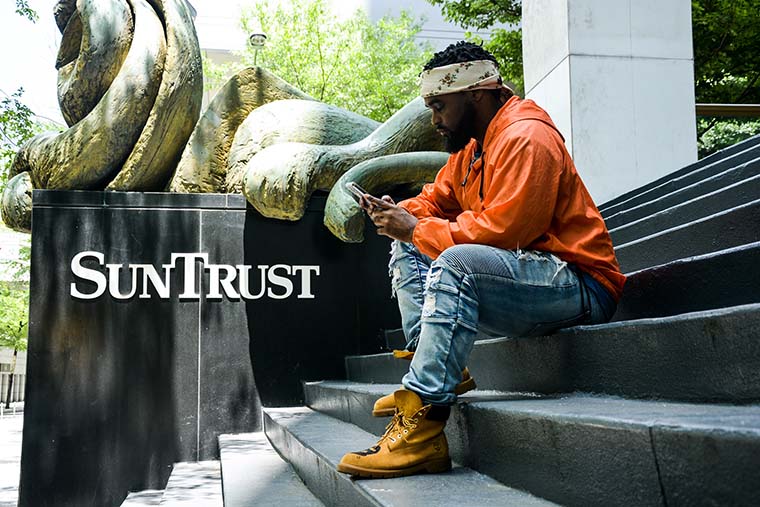 After getting his Bachelors degree in Philosophy at Morehouse College, Ervin experienced a dark period of depression and disillusionment. He credits music and a journey of self discovery with helping him heal.

What Ervin Mitchell discovered along his road to recovery is the “power of the mind to shape and share our own reality”.

That’s the message he conveys in his songs and the data show’s it’s resonating with people from all types of cultures and backgrounds.

1) Growing up in Memphis, TN, do you remember the moment you wanted to be a hip-hop artist?

I was in the band from sixth grade through college and I also have always done well in school when it comes to literary type skills. So the love just grew over time and my literary skills combined with the music. I think I just always knew I was supposed to share a message with the world in a special way.

I wasn’t exactly sure how and that frustrated me when I was younger because I didn’t really fit in with the other kids but as my passion for music grew, I started to realize my purpose.

At least, the beginning portion of it. We always grow and change, but I knew music was going to lead me to where I needed to be in life.

2) How did getting your Bachelors degree in Philosophy affect your music career and influence your path?

Getting my bachelors in Philosophy helped me out a lot on my path with creating music. Philosophy is a major that allows you to think outside of the box and create different mental environments and solutions. That’s also what I do with my music.

I just try new styles and sounds and I see what happens. It always helps to have a foundation and once you have that, it’s much better to just be a free thinker and Philosophy definitely promotes that way of thinking. Even when it comes to business, this is my approach. I learn the structure and then I give myself room to explore. That’s the only way to learn and truly innovate.

Philosophy has opened my mind to many ideas that I probably never would have even knew existed. It has been such a gift to me because it allows my mind and my music to continually evolve as I learn and grow.

I don’t like to get too too deep in interviews because I don’t want to throw people off but basically being a Philosophy major has given me some creative advantages that put me in a very wonderful position.

3) What was it like creating your latest project and what are you trying to achieve with the project?

My most recent release was called Double Dragon and it featured my brother, Reggie Ransom. We came up together in the music game, He’s been little bro since I was in middle school. We always talked about doing a joint project but we just never got around to it.

We thought Double Dragon would be a dope way to do the project. I love the concept of the two styles coming together and getting the superpowers and all that because that’s how we are when we rap together. I’m also releasing a new project in the next month or so called “Cudi Baby”.

A homey of mine, heard some of my tracks and he said my style reminded him of Lil Wayne mixed with Kid Cudi and I thought that was the most epic shit ever so I decided to name my next project after them. The first release from that project, “La La La” should be out in the next couple weeks.

My goal is to make the move that gives me the most leverage and freedom.

I definitely set out telling myself that I wanted to remain independent and there is definitely something very appealing about an artist being his own label. I think that’s powerful. It’s the path that I’m currently on and it allows for exponential growth but I am also open to partnerships.

I realize that once you build and establish your brand to a point where it sustains itself, you enter into a different tier.

That being said, when you’re in that position you can come to a entity of label and say this is what I want, and be truly willing to walk away without losing anything.

That puts you in position to boss up because even though they have the money, they don’t understand the culture the way kids do nowadays.

They try to hide this but those who know it are powerful. So if someones gives me everything that I want, I’ll consider doing business but I’ll never sacrifice my name to become a part of some machine.

I feel like the independent hip hop industry is dope right now. I feel like there are a lot of talented people out here and I feel that they are finally getting some shine.

The independent artists really move the culture, especially here in Atlanta but we don’t always know how to monetize the sauce and the sauce gets spoiled.

That’s where these outsiders can come in and because they did this or that, with this or that person, during some obscure moment in history, they feel like they have authority over you.

They think them knowing someone or being connected to someone who is successful gives them the upper hand. I think this is because they know that if artists know their true value, they would be less likely to sign bad deals and that puts leeches with no talent out of business.

I basically said all that to say that a lot of indie artists don’t know their worth and put people on pedestals who don’t deserved to be idolized. We step on each others toes to be in the presence of these people who eat from what we create.

We’re moving out of that now though. I think everyone is ready to move forward because they see what we’re capable of as a unit. That’s tight. I’m excited to see what the future holds for the culture.

My marketing strategy in everything I do is to take what makes me unique and paint that in the best way I can possibly paint it. It’s not my job to conform with what mainstream society wants. It’s my job to be myself to the fullest and find my audience.

Social media and streaming platforms like Spotify, Tidal, and Apple Music have allowed us to find the people who love us just as we are by cutting out the middle man. People have always been open to different types of things but we didn’t have the access.

Now that we do, there is no reason to conform to what’s mainstream unless that’s the style that you want personally. In that case, I’m all for it because it’s authentic and it just happens to be mainstream. I’m more about attracting people to me than me going after them.

I attract people by being creative and trying new ideas, maintaining consistency in the quality of my output, and just trying to inspire people in new and cool ways. People like that shit.

We make streaming revenue through digital distributors like Tunecore, AWAL and DistroKid.

I also collect performance royalties through BMI, SoundExchange and other performance rights organizations all over the world. My business partner Cyph and I are focused on keeping ownership of the product and building long term revenue streams.

Hip Hop today is ok. I think the thing I love most about the culture today is how welcoming it is to new ideas.

Funny thing is the the thing I dislike the most about hip hop today is that we think concepts and ideas make up for experience so sometimes we don’t care to really understand and appreciate these new ideas.

They’re just used as a means of displaying how “cool” you are or how much “clout” you have and that’s kinda super lame. Also we don’t hold the culture to any standards. It’s sort of like a anything goes type of thing and anything without some sort of structure loses it’s identity.

I’m not a hater, so my only criteria would be someone who is being true to themselves and not taking from the culture without giving to it. I also don’t like how young artists these days feel as though they can disrespect legends.

I think people forget that a lot of artists just benefit from timing. In today’s age, you pay 10 dollars and you get to listen to all music for free. It’s nothing for someone to casually listen to your song if it’s free. No investment is required to do that.

There are artists out here today,who these new dudes disrespect, that sold millions of records when each cd was 18 or so dollars, sometimes more. I think that’s something that needs to be respected because when they write the book on hip hop, a lot of these artists doing the disrespecting won’t be in it but the people they are referring to will be.

I guess the problem sort of fixes itself in that way. I always believe that you should respect your elders. I also feel like the elders need to respect the younger artists too and stop hating because we’re in position to make more money that they could. Instead of hating, everyone should team up and build together so we can own our culture again.

I’m inspired by all the new artists even the ones who’s music I’m not particularly found of. I know that sounds corny but I’ll explain what I mean.

In terms of the quality of music today, I think a lot of the quality is subpar but in regards to packaging ideas and creative new vibes and drawing people into new experiences, this generation got it. I really dig Asap Rocky and his entire aesthetic.

His music is dope too. Reminds me of some real trippy, hippy, shit. I can relate to that. Kendrick, Drake, and Cole are obviously the leaders of this generation so props to them. Musically, I’m more inspired by blog era rappers and rappers right before that era.

That’s the music that really sticks with me. I was in college during that time and that was just a very pivotal time in life for me. I’m definitely inspired by all the youthful energy in this era as well.

I feel like the people between the ages of like 27 and 31 or so right now are the leaders of this generation and it’s cool watching all the kids younger than us take the reigns and live free. I feel like we can really help each other if we learn to appreciate each other’s gifts.

Everyone can be an inspiration to everyone else. They can show us how to embrace ourselves me and show us that we don’t have to be what our parents want us to be but we can follow our dreams.

We can show them that it’s ok to hone your craft from time to time and it’s ok to have a plan and having a goal in life doesn’t make you lame. We need this shit to last forever.

This is in no particular order but Wayne, Eminem, Jay, Kanye, and Drake. Kendrick is right there though. His next album might get him on that list.