Antwan Wiggins, born March 6, 1980 in Brooklyn, NY, is an American hip hop recording artist based in Newport News, Virginia. He is known by his stage name Awon. In 2014, along with frequent collaborator Phoniks, he founded Don’t Sleep Records as a platform for himself and his friends to release music.

Awon has shared the stage with many hip-hop acts including Little Brother, Common, EPMD, MC Lyte, and Oddisee. Over the years Awon has put out many records underground Hip Hop Heads consider cult classics like:

My name is Awon, I was born in Brooklyn, I lived in NYC until I was 9 years old and my family moved to Virginia. New York was dangerous at the time and we left for a change in environment.

When I got to VA I felt free for the first time, because in my neighborhood, Fort Greene, you were a prisoner to the streets. The freedom I got in Virginia allowed me to further extend my creativity and flourish as an artist.

Man I have so many, but the few that come to mind that really shaped me were Big Daddy Kane, Rakim, Kool G Rap, A Tribe Called Quest, and Nas. In fact my dad was also a big influence to me because once I was around 11 or 12 he began to gift me with tapes he thought I should listen to.

The first one was Brand Nubian’s One For All, and the second tape I received was A Tribe Called Quest – The Low End Theory. My dad knew I loved the culture and in my eyes he was the culture seeing as though he is only 18 years older than me.

My first concert was Eric B and Rakim, KRS One, Gangstarr, Grand Puba, Super Cat, and The Youngsters. He even got us backstage because he ran into Supreme Magnetic, a friend of his whom happened to be the road manager for Eric B and Rakim at the time.

My dad introduced me to The Wu with a tape of “Proteck Ya Neck” and to Nas because the first time ever heard Illmatic was with my dad.

3) You’ve frequently collaborated with producer Phoniks, putting out records like Return to the Golden Era and Knowledge of Self. Talk to us about how you formed your relationship with Phoniks?

Phoniks is my business partner, but even more so my friend, my younger brother who is obsessed with underground Hip Hop. He reached out to me via in June of 2013, it was the latter part of the month I believe.

At this point I was considering leaving Hip Hop alone, I felt I was getting older and out of touch and would only be known for a few records here and there. I heard his beats and instantly I was back at it, he really inspired me so much I had to speak with him over the phone.

He called we chopped it up and got to know each other and in two weeks off the first batch of instrumentals he sent Return to the Golden Era was done. He was exactly what I needed, I needed to connect with my youth because my youth is where my inspiration and desire to pursuit Hip Hop was shaped.

His canvas of sound makes painting pictures of life very easy. We continued to bond and here we are today, still loving the new found interest in our sound.

4) In 2014 you founded your own independent record label, Don’t Sleep Records, with Phoniks. What made you want to do this and what vision do you have for the label?

Phoniks and I created Don’t Sleep Records as a platform for us and likeminded individuals to release music in a fashion that is more suitable for today.

We wanted to throw convention out the door and defy the stereotypical and cliche habits of labels today. We also strive for fairness and transparency amongst anyone we work with. The idea is that we are a label by definition, but our ethos is more curation of the soundtracks to this generation and beyond.

5) What would be your advice for other rappers looking to set up their own independent record label?

My advice for any other rapper looking to start their own label is to create your own business identity. What I mean by that is to do business your way and stick to it, do research, and do not focus on money! If your focus is money you lose sight of the product you create which is music.

6) Throughout the career you’ve had a chance to share the stage with legendary hip-hop acts like Little Brother, Common, EPMD, MC Lyte, and Oddisee – what were your experiences like? Did you get a chance to kick it with any of them?

I have had a great time over the years. The shows were during the time I was hitting the road with my crew, The Soul Students. Everyone was super cool, but I identified most with Little Brother and Oddisee. They were really cool and down to Earth cats. Kev Brown and The Low Budget Crew is mad cool too.

One funny story I have was at UVA, we were doing a show with The Coup from Cali and some of the band and roadies were burning some green outside the venue so we matched an L with them. Let’s say that wasn’t a great idea, the show was crazy, but while I was onstage I felt more like I was on psychedelics because everyone was moving super slow and I was moving super fast or at least it felt like that.

I asked everyone else about it afterwards and though we were on point, that medical had us super bent! Never again, all my shows are done completely sober until this day!

7) As an independent artist and record label owner, what are your thoughts on the indie rap scene in 2016?

The indie rap scene is really the only scene today! People are choosing instead of suits choosing for them, radio is dead and word travels like wildfire these days.

We live in the perfect environment for indie artist to thrive. We are seeing exponential growth. We are just about to go on a mini tour in France, and we are shooting a feature film style documentary. I would say the indie scene is doing great right now!

8) Who are some of the leading independent rappers in the game right now inspiring your grind?

The indie rappers that inspire my grind span from mainstream indie to grassroots indie. I am really feeling Hex One and his group Epidemic. I really love Ivan Ave, Nor Cal Nick, Anti Lilly, Envy Hunter, Scolla (what up doe?).

I am also feeling Hus Kingpin aka Lord Wavy, Marvelous Mag, my dude Adad is bringing heat. The OG Rashan Ahmad is like the zen master on the mic. My favorite emcee right now though is Tiff the Gift, not because of association, but seriously her new LP is crazy.

I have had the privilege of hearing it and I am thoroughly impressed. Dephlow is always on my Spotify, along with bigger names like Kendrick, Joey Badass, and Action Bronson.

To be honest its a toss up between the reception of Knowledge of Self and doing this tour. I have been blessed, really blessed to be an independent artist and have the visibility that I have been able to get without deep pockets.

I am blessed that the people really connect with my music and I have the best people supporting me that I could ever ask for, in my opinion “friends” not fans make or break you and these cats that rock with me are the best.

For the remainder of 2016 I have a plethora of one off records with a slew of producers and well as albums from Tiff the Gift, and MZ Boom Bap Beats coming out on Don’t Sleep Records so look out for those projects.

Look for Rashan Ahmad and Phoniks coming soon as well, I am on that joint. We plan on more shows around the world and releasing this crazy documentary by our brother Teo Frank. What a time to be alive, what a great year thus far and more to come. 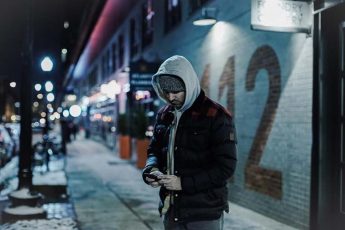