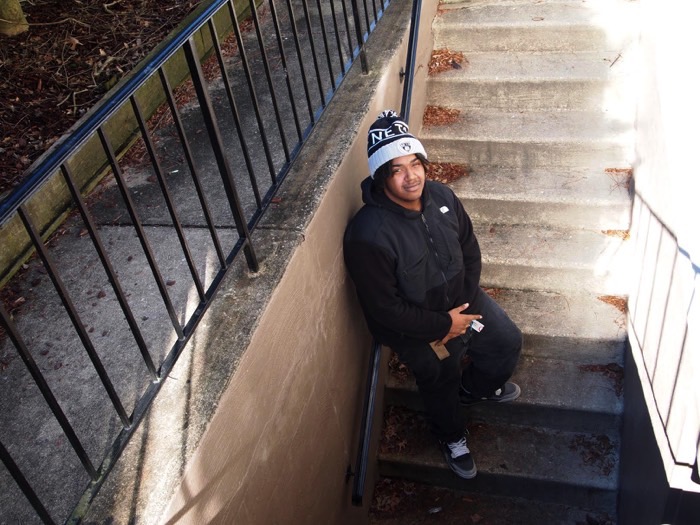 18-year old Maryland rapper Dre5k is getting ready for a big 2015. With his upcoming tape, Right To Glory, in the works, Dre5k decided to drop a little something to warm up the fans.

The N.I.N.A Tape is an 8-track project featuring the rapper and his squad dropping bars over popular instrumentals as they get ready to drop the big one some time this year. You can stream or download The N.I.N.A Tape here.

Honestly my background is long as hell for real. Ive lived in California, Washington, and Maryland. I was born in Oakland but soon after moved to Maryland for the first time.

Stayed there for a little while until my parents split. Then me and my sister moved to Seattle with my mother to live with her mom. Soon things started changing for the worst and my dad had to come take us back to Maryland. I’ve been here ever since then.

The first time I freestyled was when I got the name Dre5k. It was like the first year I was in the 10th grade. I was chilling with some random ass people and some of my main friends from back then. Then one of my home boys told me to freestyle cause they were doing like a cypher type thing. I had never rapped in front of people but he knew I could cause he seen me writing rhymes before.

So I was like fuck it and just did it. I started rapping and just didn’t stop til they made me. They said I was rapping for close to 15 minutes. Then they tried to call me Andre 5000 cause they said i spit like 5000 bars. But I was like naah thats jockin Andre 3000. So then they was like Dre5k and its stuck ever since then.

Lil Wayne is a big influence on me. He’s the greatest in my eyes. His metaphors are what I mainly try to emulate from him.

Kanye West is another big influence. His originality is an inspiration. He is music. Period. He’s shown me confidence is key

Big Sean is another big one as well. His flow his bars and the fact that his songs connect with the people. He touches all people in his music. You cant help but feel what he says in his raps.

Some other guys that have also influenced me are Wale, J Cole, Kendrick Lamar, Ace Hood, Meek Mill, Mac Miller, A$AP Rocky, and Joey Bada$$. I hope to do some work with all these guys one day.

I think I’m more of a lyricist. I spend a lot of time in my head just thinking of ways to blow people away with my rhymes but make it true at the same time.

I try not to front on the track a lot. I just started rapping on the mic like last July. So we’ll have to see how my style changes as I grow as an artist. I had to learn that freestyling and making a song are two different things.

Now that I see people wanting my music every song is taken seriously. I can’t use a beat unless it speaks to me. I try not to write without have a beat anymore either, it just makes things easier. I sit back play the beat, and let the sounds talk to me.

I kinda just step in the studio and let it happen. nothings forced its all just feelings. I just be chilling when I make music for real. I think when you make it a set routine it takes away your free spirit.

When me and my main producer, Austin T, made the tape we were just trying to show people whats coming. Most of the songs happened when we were just playing around on. Most of the rhymes though were wrote like two years ago.

I saved most of my new shit for this next tape I’m working on. But it was pretty chill when we did the last one. We work in Austin basement which is good and bad at the same time. We don’t have to pay for the studio time but we’ve also never been to a real studio. We try not to have to many people in there while we work so its mainly just who ever Austin feel like having at his house.

To be honest I’m not really been worried bout that just yet. I just throw it on Twitter and Instagram, then tell my peoples spread the word. But I am going to school for marketing so that is all going to change in the next coming years.

I think the game is fucked up right now. The fact that YG was not nominated for one Grammy is ridiculous. That blows my mind. I also feel like the reason that happened is because the people are so use to hearing music without a meaning or a story behind it.

Not saying the music nominated has no meaning. But People don’t see just what YG did on that album. He basically just gave you a trip into the eyes of his teenage self. But you can’t really blame the people for the current state of the game.

It’s the artist fault for making a lesser quality of music these past few years. I think artists need to stop doing what everyone else is and try something new.Thats what I’m trying to do with this next project im working on.

I listen to a lot of music now. I’ve taken a trip through rap a lot of times so that old school shit will always be in my playlist. I listen to all of my influences a lot. I study them and take things from their style then tweak it into mine.

I like Lil Herb and Lil Bibby a lot top. They bouta be big in the game. I started listening to all genres of music. Trying to see the differences in what people like in other kinds of music so I can find ways to grab their attention as well.

The guy blowing my mind right now is Nikko Lafre though. If you havent heard his music go get hip. Yo got bars and knows how to make good music so check him out ASAP.

Man I’d have to work with Big Sean. He seem like a real cool ass dude for real. I feel like me and him would some crazy music. He the best out right now And I think I’ll be the best in the future.

Probably having the people closest to me finally tell me I’m doing something right. In school I was never good with grades. I dropped out and got my GED.

So to finally hear my closet friends and family tell me I’m doing something to make them proud. It’s the greatest feeling, I feel like no one can stop me as long as I have there support. Also making all my haters shut they fat mouths. My next single is for all the people who doubt me.

I’m working on a new tape called Right To Glory. I’m dropping a single off that on February 16th. Then a couple freestyles a little after that. I got my team working on booking me some shows around my way but I need to drop more shit before we do that. I also have a website coming soon. So yeah we making some moves man. I can’t wait to show the people how me and my team have grown.