Dallas rapper-producer, MiC Larry, has dropped his latest single “Make It Happen” on iTunes and SoundCloud for fans to enjoy.

1) Your single “Make It Happen” is hard as fuck but its also very melodic and catchy – perfect for dancing. What inspired you to make a song like that?

I was inspired in part by Daft Punk’s “Lose Yourself To Dance”. The song had a simple message and purpose, and that was to get people to dance.

Many of the songs I have written in the past and still now are laced with political and religious themes and I wanted to add some variety to my songs.

2) How has the reception for the single been so far?

Well, as I said earlier, most of my music has political and religious themes to it, so this was something new for my listeners. I’ve gotten a mixed reaction from people who listened to my older music, but I’ve also gained a good amount of new listeners.

3) How did you get started producing and rapping?

I had a roommate who made beats on FL Studio. I asked if I could use the software while he was I work and he was cool with that. Around this time, I I ran into another local Dallas artist, C. Burris, who made beats.

In my opinion, he made some of the hottest beats I’ve ever heard. I asked him to mentor me, and so for the next few years, I’d send him beats and he’d tell me how bad they were and what I needed to do to improve!

I think every artist needs that person around you that doesn’t just nod their head and say what you’re doing is great. Constructive criticism made me into the artist I am today.

4) Who were your musical influences growing up and how have they shaped your craft?

My musical influences are a combination of Swisha House Dirty South rap and soul/dance songs my dad used to play in his band – KC and Sunshine Band, Kool and the Gang, Temptations. Earth, Wind and Fire and all those great musicians.

Just recently, I’ve learned to appreciate songs that just made you dance like my dad used to play and that’s where I got “Make it Happen”. Dirty South rappers have influenced the way I flow and I think that will always be a part of my music.

5) As an independent artist, what are you doing to differentiate and market yourself in an overly saturated landscape?

What I continue to learn is that many up and coming rappers don’t have too much say in what their beats sound like. Since I also make the beats I rap on, I have full control. I love making smooth transitions, like how in “Make It Happen” the song changes during the chorus.

It has a completely different feel than the verses. A lot of my upcoming songs are going to have even more dramatic beat changes and transitions. This really separates from other artists when I’m performing.

I like it. I’m not one of those people that say music is getting worse and all the good songs came out during the 70s/80s/90s. We’ve just had more time to filter out the bad songs and keep the best songs.

I also like the fact that hip hop is infusing with other genres. I think the fact that it’s more wide-spread makes it more better. More artists are painting the picture with their unique colors.

7) Which 3 rappers would replace in these lyrics: “Argue all day about who’s the best MCs, Biggie, Jay-Z or Nas?”

If you were to ask me the last three rappers I would want to find myself having a rap battle against, I would say Andre, Lupe and Eminem. 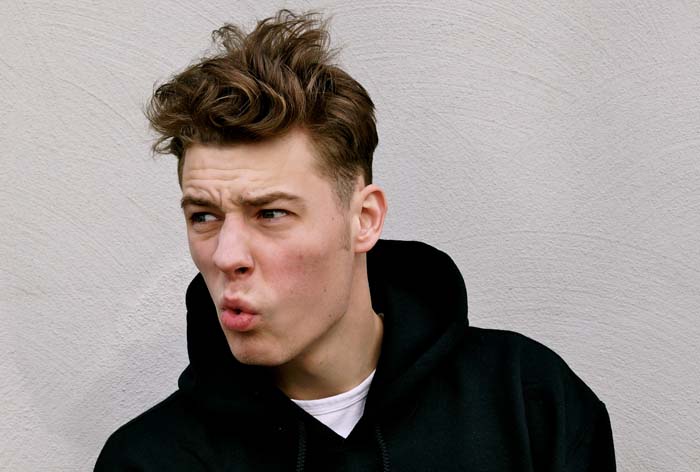