1) What was it like growing up in the Chicago westside?

Growing up on the westside of Chicago is great. It’s about money and women out west. Minor gangbanging but money governs all. My hood ain’t no harder than anybody elses. Mind your business and watch the company you keep and you’ll live another day.

2) With the situation as it is in Chicago at the moment, what is it like living there? Does it influence your music in anyway?

My music is definitely influenced by my surroundings. Things I’ve done, seen, and survived. As far as the overall situation in Chicago I try to focus on me because I look at MLK and 2Pac as people who risked their lives for nothing to get better.

I’m not a politician I write poetry to music. If you feel you can implement things I say/do to your everyday life by all means do so but, I’m not tryna be a savior. I feel sorriest for the soldiers at war overseas not the ones at war in Chicago.

I look at things like Dennis Rodman marrying himself and people bidding on a Lesean McCoy receipt from a restaurant and I say to myself “Damn, they out there dying for us to have the freedom to do this dumb shit in this country”

3) What is it about Lupe Fiasco or Andre 3000 that make them your top 5 rappers?

I feel Lupe is Chicago’s best rapper all time. He is the ultimate lyricist. I’m not as impressed as others about syllable rap,. just because you use a lot of syllables don’t make you lyrical. It all stems from “LYRICS” Hence the word LYRICal.

4) What’s your process in the studio? Does it vary track by track or do you have a routine?

I always think quality over quantity in the studio. It’s not about the amount of music you get done. I hear a lot of rappers say “I don’t write” and I think to myself, I would hope not.

I hope you didn’t take the time to write that down, read it over, and go with that as your verse. My hook is the driving force to every song I do. I won’t purchase an instrumental if I don’t at least mumble a hook that matches the melody within 3-5 minutes.

I feel like Hip Hop is in a good place. Tons of new artists are emerging daily. Rather you get on from years of grinding or you become a success overnight, I salute my peers. As far as the future of Hip Hop I hope to see more millionaires come from it.

6) Which 3 rappers would replace in these lyrics: “Argue all day about who’s the best MCs, Biggie, Jay-Z or Nas?”

Bizzy (Melody/Harmony) Lupe (Lyrics) DMX (Pain) All 3 of these artists can care less about making a “hit” record. They do them and you accept them for it. Record execs, trends, and fair weather fans don’t change what they do. 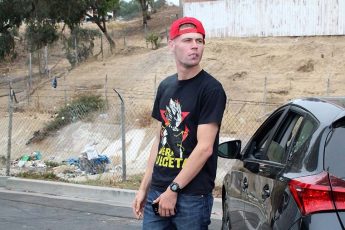