I’m Marc Griffin 20 year old rapper from the east side of Buffalo, NY. I was born on the 20th of January in 94 in Louisiana but raised in Lo City, a lil nickname I gave my city due to the ranking the world perceives our music and arts scenes ya know. Im a military brat I guess moving around alot as a kid I never had a real chance to make alot of friends ya know.

My family never had the wealthiest of situations ya know, coming from a pretty humble family on welfare I think that’s ultimately shaped what type of guy I am today, well that and my Granpa. My Granpa was my first real best friend, had a bond with him that was indestructible. Made a promise with him when I was 10 that basically stated that I would be a virgin til marriage, keeps my morals in check ya know.

My mom and dad got a divorce when I was in the 8th grade, shiz was real hard but with my two brothers and my older sister I guess we worked through it ya know. I love my girlfriend, she’s a real big inspiration on my life as a whole, she’s the reason I do any of this to be honest, Ima marry that girl and bring her on stage when I win my Grammy, mark my words. I use to get bullied alot growing up, mainly because I was different than the other guys man.

I mean dressed pretty lame so that made me an easy target from the jump and so guys targeted me and made a mockery of me often, but thanks to my Granpa, I’m proof that you don’t have to give up even if your peers don’t value you as much as you think they should, never give up.

Michael Jackson. Just as an artist, a person, everything, he’s the king, I shed real tears when he died man. I’ve always wanted to meet him hey maybe when I get to heaven one day right? But Nas, has the biggest influnce him and Pharrell yo. Illmatic is my shiz I did a 12 page paper on it in one of my Sociology classes dawg got a 100 too but yeah Nas is a living legend he’s amazing just amazing. Lauryn Hill, A Tribe Called Quest, Jay-Z, Rakim, Andre 3000, J.Cole too throughtout my high school years I would listen to him religiously haha. And artists such as Earth, Wind, & Fire, Aaliyah, Sade, Justin Timberlake, Kurt Cobain, Jimi Hendrix, I love all them too bro. Definitely all my favorite artists bruh oh yeah and Lupe Fiasco Kanye West how could I forget them, legendary as well.

My process for making music varies from track to track. If I’m at my boy Profit’s (Cedric) lil home studio then while he is cooking up the beat or if he’s showing me something that he made I’ll be playing his PS4 to get my juices flowing. I find that playing video games expands my thinking process and gets me to think outside the box and I think as an artist especially a rapper you have to be able to do that. It helps me with my metaphors, juxtapositions, similes, etc that i’ll be using within that particular song.I also like to write all my lyrics down you know the old fashioned way bruh, my Pad and my pen.

The making of Supervillians bruh. Well it’s a collab between me and my homies 94 Ronin. The idea came about in January. Profit and AP called me and were basically like look we wanna get far in this rap shit and we think we can especially with your talent and our beats, we believe in you bro. And so we got crackin on it and at the time there was a terrible blizzard in Buffalo which resulted in driving bans and shit but despite that we still got it started.

But due to several delays and all that it wasn’t fully complete until the end of August. But the atmosphere for this project was crazy like none of us do drugs so it was just a room full of sober dudes with hella takeout playing video games and listening to oldies tryna see what they could sample for the tracks. Things that were always in discussion in the stu was basically talk of what we would do if Hov called us tomorrow or if Nas sent us a dm on twitter just extraordinary shiz ya know but it was fun man, it’s always better to record and write around ya homies that you’re comfortable around, just flows naturally. 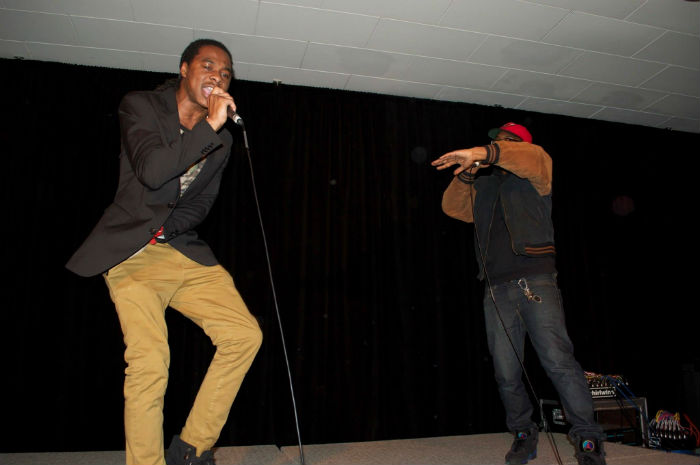 Well 94 Ronin as a team, a collective, we hit different outlets like Twitter, Instagram, Facebook, to me putting flyers and cds up around my school dawg. We do a bunch of shiz in hopes we catch someones attention ya know, doing everything we know how to do but just basically incorporating our music within it ya know? Doing shows, open mics, casual conversation. Being real people persons, Gramps told me that would get you far.

Damn you make it sound like I made it bruh. Well I guess I would tell em to be themselves and send a message with their music man. Don’t do anything for “the easy buck” that shiz is extremely lame, if you gon do music or anything else, do it because ya hearts in it not because it’s where the cash is. If it makes you happy then thats the reason and make sure your message is as strong as your drive is, if it makes cash then that’s a plus ya know. I guess that’s what I would say. I’m still tryna make it my damn self bro I’m still watchin inspirational advice videos from Pharrell, I think I’m in the same spot they are in.

I feel like a new resurgence of greatness is happening right now. A bunch of artists out right now making noise man and it’s a real good look. I think it’s headed in the right direction from what I’ve been hearing you know. I mean I feel it’s a lot of talented male and female MCs out here right now that are re-shaping the culture into what it once was but possibly better ya know. I’m excited that I’m on the road to be a relevant citizen of this community hahaha should be fantastic Hip-Hop scene by 2015.

J.Cole & Logic. Hands Down. Under Pressure was an AMAZING album bruh, amazzzzzzing hahaha. That boy Logic so damn talented it don’t make no sense. I’ve been following both of these artist respectively since they both came out on the scene. Under Pressure and anything J.cole is on constant rotation in my mini van every single day, Mariah will tell you.

I’m waiting patiently on 2014 Forrest Hills Drive I’m not even illegally gon download it I’m gonna buy that album dawg, he’s one of my great inspirations so I gotta support him yo. Born Sinner was amazing in opinion, Friday Night Lights was perfect, Cole World Sideline Story was alright and both The Warm up and The Come Up were amazing and the Any Given Sunday series was pretty good too so to say the least I’m excited as hell for his new shiz bro.

But yeah Logic is amazing these days, boy is blessed Joey Bada$$ is tight as shiz, Action Bronson, Jaden Smith is that boy everybody need to stop sleeping on him uhhm Nitty Scoot MC and Rapsody! bruh. Rapsody is that shiz yo, Beauty and the Beast EP, She Got Game, she snapppppped.

Too good but doesn’t get enough credit, probably because she’s a woman, men can’t take it if it if a woman is killing raps over them, niggas got too much pride smh but real recognize real ya know. Oh yeah Big Krit too man I’m convinced he gon make alot of noise in 2015, he’s the face of the South bro. But yo thank you for this opportunity man I really am so blessed for this. i’ve been praying someone gives me a chance and I got that tweet from you man so thank you hopefully we can get another interview in person one day bro, go download Super Villians on Datpiff.com if you haven’t! 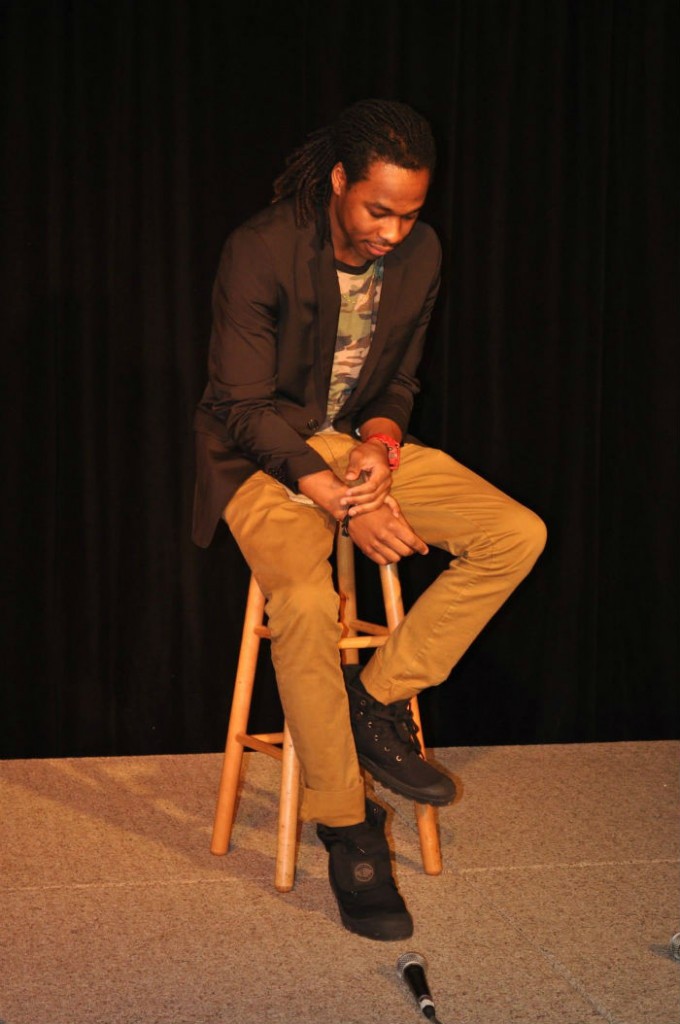 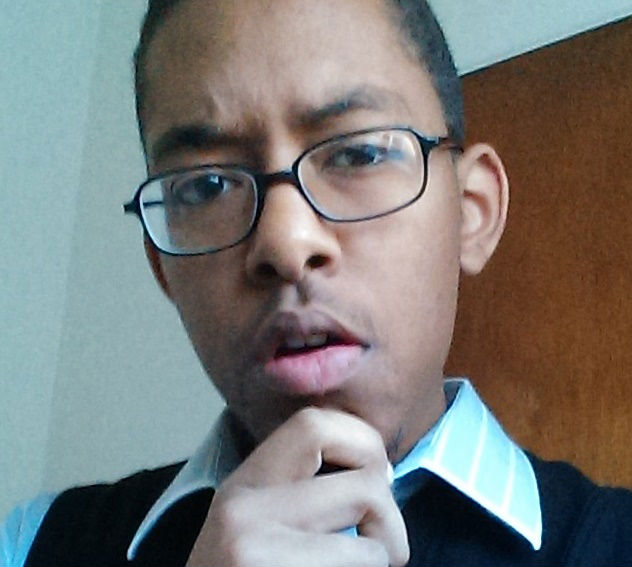