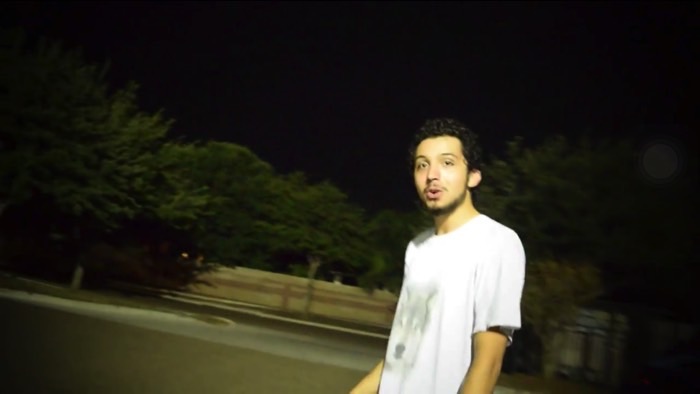 Austin rapper, James Macro The Astro MC, recently dropped his latest project I’m Just That Guy, For Now – a 14-track tape that showcases his self-awareness and keen observations. You can stream or download the project here.

I grew up a bit different from the normal kid, I’d say. My Dad was in the military when I was born so we were constantly moving. When I was born in my hometown, Laredo, we stayed for a bit then headed to Zapata, a small town in not far from Laredo where my grandparents lived.

From there we went to Chicago for about 6 months. From there, we moved to Mayport, Florida until I was 8. After that, we headed back to Texas to this small town called Kingsville. I was there until the first half of seventh grade and then we moved back to Zapata for the 2nd half of that school year. That’s when I was the screamer for the first band I was ever in…good times. That summer, we headed back to my hometown and I was there until Sophomore year in college.

Now I live in Austin. I thought it was cool moving a lot, but I missed some of my elementary friends and never had a chance to build a solid relationship with anyone until I was back in Laredo. Its cool though, I found most of them on facebook. Anyway, like I said before, I’ve always loved music, especially, Hip-Hop music.

My mom was a Tejana singer and that’s where I get the passion from. Why did I choose Hip Hop over that? I didn’t, it chose me. The first R rated movie I saw was 8 mile when I was 4 years old in Florida. There was just something about the way they flowed and the beats really caught my attention. The very first CD my mom bought me was the 8 mile soundtrack.

Wanksta was THE JAM. My mom would say, “If it says bad words don’t listen to it!” I’d be like, “Okay.” and listen to it anyway. I couldn’t stay away from beats like Spit Shine from Xzibit. That was the one thing I loved growing up. On top of that, my mom was a HUGE Eminem fan. She’d rip his whole cd from Limewire for her and rip the radio edits for me. It was dope af.

My musical influences coming up as an artist, when I started taking it serious, definitely had to be Nas with Illmatic, Eminem, Joey Badass with 1999, Wiz Khalifa with Deal or No Deal, Kid Cudi with A Kid Named Cudi and some others I can’t remember off the top of my head right now. But I’m kinda weird with influences.

For me, they’re changing all the time. Especially because I’m continually broadening the scope of music I listen to. When I was starting to come up, because I’m still on the come-up, it was all Hip-Hop all day and nothing else.

Now I jam to a lot of other genres, but those that I listed above were my bigger influences when it came to making music. I wanted to take Nas’ delivery, Wiz’s voice, Kid Cudi’s uniqueness, Joey Badass and Em’s lyrical style and just mash’em all up. It was extremely challenging so I decided to just develop myself as an artist.

Oh it varies. There’s songs where I’ll make the beat in a few hours, write the concept and everything else and have it done that day. There’s some beats that’ll sit as loops or chops on my computer for a couple of days or weeks or months and then I’ll come back and finish it in an hour.

Sometimes songs won’t be finished because its like that with lyrics too and really I shouldn’t even be grouping song processes together because each song is just like a person with its own personality and feel and message.

Some processes are similar, but me personally, I’ll adhere to what I think would make the song sound awesome. I try not to go for a certain “sound,” but I know what I want a certain beat or song I’m working on to sound like. That makes sense idgaf. Like Bruce Lee said, the best style is free of all styles. He said something like that. “Be like water.” I just adapt to the music.

A lot of introspective thinking. A lot of reading. A lot of lonely nights in the studio. and a lot of getting over the fear of putting myself out there where I can be judged and criticized. While I was beginning the project, I was pretty insecure about myself, but I would just remind myself, “This is your music. You can do or say anything.

Put your troubles and your worries on this pad. Not everyone is going to like what you’re doing and that’s alright. That’s their problem.” After a while, it sunk in and I was able to direct all my energy into what I wanted to say. I kept the studio vibes calm and quiet so ideas would just come to me and at the end of the day I said what I feel needed to be said by me because this is my music, my message.

The idea for it came about after my wanting-to-sound-like-my-idols dilemma. After I realized what I was doing, I was tired and, frankly, a bit disappointing in myself. I just wanted to be honest. Putting up an image was exhausting and I just wanted to do what I was comfortable with. That’s where the name came from. I was never popular or the dude that got all the girls or the dude poppin bottles in the club or a gangster.

I thought to myself, “Who am I? I don’t have anything that defines me at the moment other than being tall and slim with curly ass hair. I’m just Jimmy. I’m just that guy until I change that.” and boom the title, IJTGFN aka I’m Just that Guy, For Now, was born. 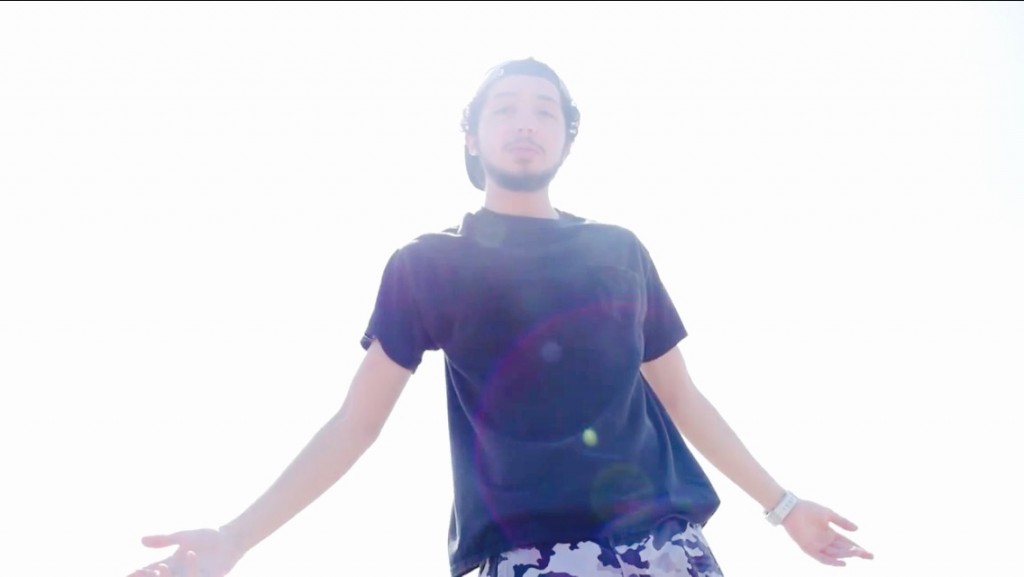 Not really much of a difference in the way I promote myself. I’m more focused on just being an individual because that’s what attracts me to another artist’s music.

Their personality on a track is what I think is one of the more important things. But actually making it to someones ears is a different story. That’s a good question. I’m going to meditate on that and up my promo game.

Number 1 tip, be yourself and know who you are. I cannot stress that enough. Don’t go out and “look for yourself” on a dotted line or look outside of yourself. You look inwards and develop from within first.

I knew being on a stage was for me even before I had the opportunity to get onstage and you know what, I was a little nervous, but I spit my verse like I had rehearsed it a hundred times before, looking at the crowd of maybe 20 in the eye and I knew exactly I was where I needed to be at that moment. After that, I felt like me and it was the best feeling in the fuckin world.

To reiterate, be yourself and know who you are. If you’re here to rap about politics, gat dammit, you do that to the best of your infinitely expanding abilities. If you’re here for a nice paycheck, chase that paper.

Give it run for its life. If you’re here to have fun and make dope party music, maaaaaannnn, tear that fucking roof off and if at any point you want to change and your heart’s in it, you do that shit too. Think for yourself. Only make moves when your heart’s in it and live the phrase sky’s the limit….muthafucka. I’ll see you chumps on top.

Hip-Hop today has evolved so much it now has different sects. There are a lot of things I don’t agree with when it comes to the popular side of, especially, some of the messages, but I just don’t listen to certain areas.

I’d rather spend 5 minutes searching for an artist I relate to or that I like than spend those 5 minutes showing some homies a song I think sucks and talking shit about it. Negative energy is draining and if I’m not artistically critiquing something than I’m wasting my time.

I like to move forward, always. Just like Hip Hop; ever evolving, ever growing. I don’t think Hip Hop is in a bad state. It’s just changing. If you have an outfit that’s super fly, that’s dope, but you can’t wear that shit every day. It gets old.

These days, like I said, I’m listening to punk rock and blues and electronic, singer-songwriter, classic rock, jazz and whole slew of other genres aside from HipHop and, honestly, it’s because I’ve lost faith in a lot of rappers. In terms of Hip Hop, I’m mostly listening to what I’ve listened to before.

I recently found out about OG Maco who sounds pretty dope. Other artists just aren’t as interesting as they used to be. It’s probably because I make music with the same foundation so I’m not a casual listener anymore.

It’s hard for me not to critique something in my head now that I know about mixing and lyrical content and whatnot. But nahh nobody really surprises me these days. I’ll hear some dope lines here and there. I’m sure it’ll be different down the road. 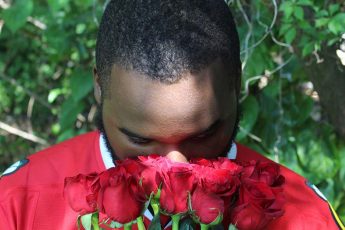 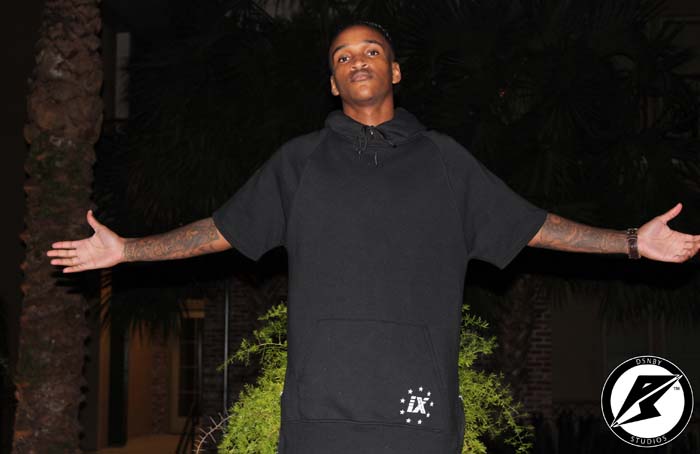